42: Making The Decision To End A Business

42: Making The Decision To End A Business 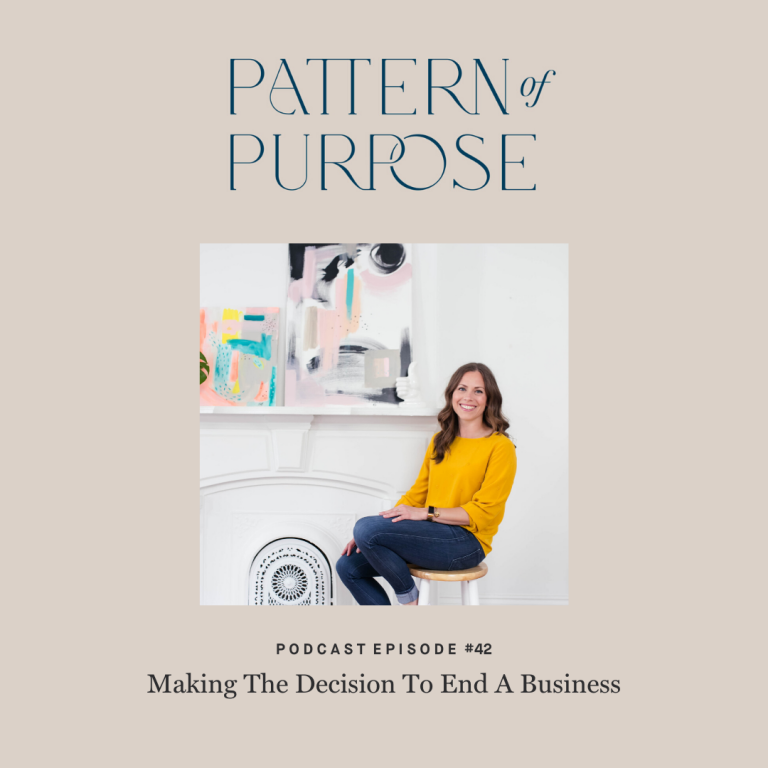 Have you ever felt stuck in your business? It’s not something we talk about as entrepreneurs—something we reserve for those working a 9-5. Kristy Duke joins me to talk about setting up your business so it supports your life and how to make difficult choices to when your vision changes.

On this episode, Kristy and I discuss:

Most creatives start their business with passion, talent, and a quest for freedom. But as their businesses grow, they face burnout and feel stuck. As a CFO ally, Kristy Duke has developed a process that helps small business owners refine their systems, become more profitable, pay themselves consistently, and run their business smoothly and more efficiently.

In 2010, Kristy was coming off the heels of traveling and living abroad. After Hurricane Katrina hit, she evacuated to Chicago with friends before embarking on an adventure living and teaching with a non-profit in Chiang Mai, Thailand.

When she returned to her hometown of New Orleans and opened an art studio called Color Me Nola. What might seem like a risky starter business to some, felt natural to Kristy.

“I didn’t realize you could do a less risky version of that business. It was almost like I was blissfully unaware,” Kristy said.

With her entrepreneurial spirit and drive, she knew she was basically unemployable and was committed to just figuring business out on her own.

Around the time she moved back to NOLA, her would-be business partner, Ciera, was running a local meet-up for creatives with her sister. When her sister moved to NYC, Ciera was looking for a co-lead, a position which Kristy happily took on.

After stepping in, Ciera and Kristy were hosting monthly meet-ups for creatives all over the city. They featured small businesses and connected industry partners. They tried out field trips, happy hours, and interactive experiences.

About two years in, they realized they were putting in a lot of hours for a meet-up. It had the potential to become something bigger.

Kristy and Ciera, along with a co-founding partner, brainstormed an idea. What if they could host the first creative conference in New Orleans that would combine a mash-up of all their favorite things about entrepreneurship?

A CONFERENCE FOR CREATIVES

The idea started to take hold after they launched a Kickstarter campaign. They did pre-sales, judging early interest, before committing to move forward with the planning stage. Looking back, Kristy heralds this as a great low stakes way to test a concept.

When they were fully funded, just three days before the campaign ended, they got a cease and desist from a business owner claiming they could not use their conference name, Pursuit. She shut down their Instagram account, their Facebook account.

They needed a new name and they needed it fast. VenturePop was born.

Kristy, at this point, knew a thing or two about running events. She had been behind the scenes of some early Being Boss vacations and worked with Joy the Baker to host high-end retreats. These experiences gave her the knowledge of how to curate speaker line-ups and handle partnerships.

One thing they committed to was getting high-caliber speakers who would be compensated for their time. As creatives themselves, they never wanted to ask someone to give their time for free.

The conference became a success.

They had entrepreneurs flying in from all over the country. They would sell tickets for the following year’s event in the last hours of the conference. And the event itself was pure joy for Kristy.

But the times in between the events–when it was all planning but you still needed to keep the momentum high–that was a grind. Going through hundreds of speaker submissions and keeping up the newsletter when nothing was really happening wasn’t energizing for Kristy. Not to mention the cost. Running a live event is risky and difficult to support full-time incomes.

ENDING ON A HIGH NOTE

Leading up to the 2018 conference, Kristy and Ciera knew they weren’t sure about the future of the conference. They decided not to pre-sell but weren’t really sure what was in store for the year ahead.

As equal partners, Kristy and Ciera had to decide together what VenturePop would become. Kristy felt more ready to move on, but it was a big decision to pull the plug completely. There’s so much work that goes into disassembling a partnership and they had seen some partnerships end very poorly.

In the end, they knew that VenturePop wasn’t sustainable the way it stood. Feeling a pull toward different work, Kristy couldn’t commit to pivoting her own business with VenturePop on her schedule.

A few months after their fourth conference, Kristy and Ciera sent a heartfelt email to their list notifying them that VenturePop had come to a close.

A PIVOT TO MAKING BUSINESSES SUSTAINABLE

Kristy considers herself someone who needs to feel very challenged to stay engaged. She gets bored quickly and if her consistency is lacking, she starts to drag herself down. After VenturePop was officially closed–the partnership dissolved–she had to figure out what was next.

She also started digging into what the numbers were telling her. This meant focusing not just on what she was passionate about, but also things like profitability and sustainability.

“When you don’t feel supported by your business, you don’t really want to support it,” Kristy realized.

Being surrounded by so many creatives who were talented and passionate, she saw many of them struggling with the finance and operations side of their business. They were relying too much on gut checks and not how to make their business create a sustainable income and solid career for them.

What started as just a hunch, Kristy leaned into helping fellow entrepreneurs get to know their key numbers and restructuring the back end of their businesses–the things that no one on the outside sees until they crash and burn.

Kristy’s new mission as a CFO ally to established businesses feels like home. It gives her great joy to be able to help leaders make their business work for them again, whether that means restructuring or pivoting. Advice she has for the rest of us?

“When there’s a fork in the road, you’ve got to trust your instincts. When you move on from a project that’s lived its life, it’s not a failure. It just means you’re ready to graduate from the phase you’re in and move on to the next.”